You are here: Home

The Naukluft is a huge, largely unpopulated habitat with astonishing ornithological diversity. Peter Bridgeford, who worked here as a park ranger from 1982 to 1999, counted over 200 different bird species at the Naukluft. 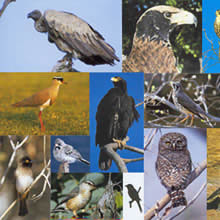 The Naukluft massif: A bird paradise at the edge of the desert

he Naukluft massif, which measures around 2,100 m2 and constitutes 4% of the Namib Naukluft Park’s land surface area, is a highlight in the Park’s landscape. Due to its relatively abundant water supply, this compact group of mountains is an unexpected oasis for humans and animals in an area characterised by a scarcity of water, strong winds that parch the land, and a semi-arid climate. 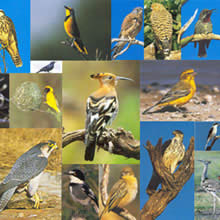 In south-western Namibia, one can mostly expect rain from the end of January onwards. For a few brief months, the Naukluft then changes into a practically verdant paradise. During this period, rainwater is fed into and stored in the porous limestones for almost the entire year.
Consequently, in a relatively small area, one can observe a paradise with a great variety of birdlife, including those usually only found in wetter habitats, such as grey herons, hamerkops and Egyptian geese. Over a number of years, research under the stewardship of Peter Bridgeford produced a comprehensive list of all the bird species that, depending on the time of year, a visitor to the Naukluft massif had a fairly good chance of spotting.

Although they are not the only attraction that the Naukluft offers, more than 200 bird species have been found at the massif. Many of these species can be referenced in the book on Namibian birds by Ian and Jackie Sinclair (2001, Struik, Cape Town), where they have been photographed and described. We recommend this publication as a field guide and in preparing for your trip.

List of bird species occurring in the Naukluft. Boyer & Bridgeford, 1988, "Birds of the Naukluft Mountains"; Madoqua, 15, 4:295–314
Prev
Cookies make it easier for us to provide you with our services. With the usage of our services you permit us to use cookies.
More information Ok